These Cinnamon Sugar Brioche French Toast Bites are a fun a unique way to serve French toast! I used brioche bread and a SECRET INGREDIENT to elevate the French toast flavors we've all come to love!

Serve individually or on kabobs for a fun brunchtime snack prefect for slumbers parties or bridal showers!

I have to be honest with you. I was never a huge French toast fan. Maybe because most French toast is just thin and soggy with no texture what-so-ever.

But THIS French toast...is NOT your average French toast. It's thick, sweet, crunchy and packed with flavor. They taste like fried cinnamon donuts so how can we go wrong here?

I love that you can pop them with your fingers while on the go OR skewer them for a fun party twist!

My kids will love not needing a fork and knife too.

If you love sweet breakfast or brunch recipes, try my Baked Strawberry Donuts!

Step 2: Mix together your eggs, milk and vanilla in a large bowl.

Step 3: Toss in your bread squares and coat thoroughly. Don't leave them in too long or they will get too soggy.

Step 5: Add to a large bowl and transfer your soaked bread cubes one at a time. Toss to fully coat.

Step 6: Add melted butter and oil to a skillet over medium-low heat.

Step 8: When golden brown on each side, remove and toss in cinnamon sugar mixture.

📃 NOTE: You can print the FULL recipe with all ingredients & detailed instructions below!

Brioche the RIGHT kind of bread is important when it comes to French toast. You do NOT want to use pre-sliced bread unless the slices are more than 1" thick.

Instead, try to find an uncut loaf of bread or hot dog/burger buns.

Brioche bread is similar to a challah and is sweeter so it makes for a deliciously rich, French toast.

French toast is pretty straight forward but depending on the season, you can tweak them a bit!

If you are throwing a brunch party, bridal shower or baby shower, I suggest purchasing these long wooden skewers so you can skewers 4 or 5 at once and guests can take them with minimal contact! Placing them in chafing dishes to keep them warm is best.

Serve with mini maple syrup cups or brown sugar syrup so they can grab and go!

Can I use French bread instead?

The flavor will be different but it's most important that the size of your cubes are large.

Sugar is on the exterior of your bites and it burns easily so keep the heat low, use enough butter and keep tossing your cubes.

Can I reheat this later?

Yes I suggest reheating in the oven at 325 degrees F until warmed through. 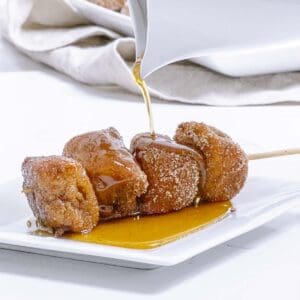 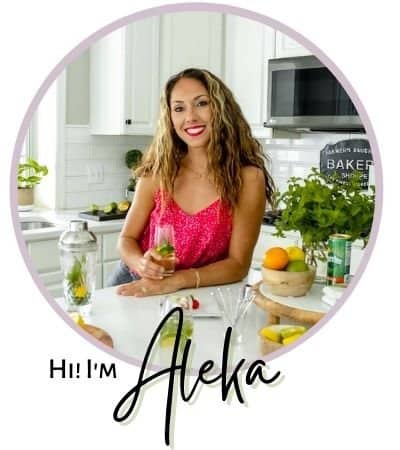